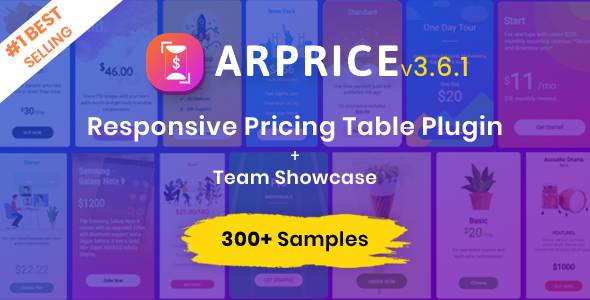 ARPrice is the most complete and fully featured pricing table plugin for WordPress of 2020 with 300+ pricing table templates, giving you all the tools you need to build unique and responsive pricing plans and comparison tables in minutes. You can also create beautiful team showcase easily.

The beautiful and intuitive ARPrice dashboard is truly one of a kind, with its impressive real-time editor. Choose a template and then use simple click, drag and drop tools to customize your table, down to every last detail. You can add an unlimited number of columns, change colors, fonts and icons, and add your own images and ribbons (to advertise a discount, for example).

With the ARPrice WordPress pricing table, you can make your columns more dynamic by adding animations and effects (such as hover, glow, fade, swing, slide or fall) and can even integrate video (with YouTube, Vimeo support, and more…). We are also proud to announce the arrival of the much-requested weekly/monthly/yearly toggle switch, which you can set as a tab at the top of each table.

The beauty of the easy pricing table ARPrice ireal-time editor, aside from how easy it is to use, is that it allows you to instantly preview your changes, and see what your tables will look like across all devices (mobile, tablet, etc).

ARPrice pricing tables WordPress plugin gives you more unique templates than any other pricing table plugin. 20 templates, each with 13-14 color options, 900+ fonts, and over 2400 different font icons, offer unlimited scope for your own personal customization.

MinervaKB Knowledge Base for WordPress with Analytics